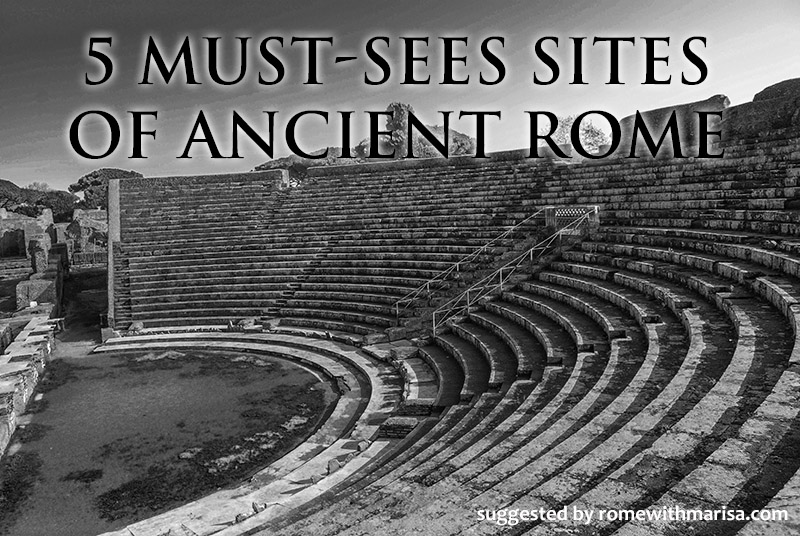 Rome is a city with an impressive density of archaeological sites. If you want to go beyond the visit of the Colosseum, don't miss the chance to discover these five other sites – my personal recommendations as a Roman archeologist!
Remember when walking around the sites to wear comfortable shoes, a hat and bring with you a bottle of water - it can get hot!

The Forum was the main square of Ancient Rome. It was like an open-air sitting room for plebeians and a catwalk for Senators. Today, visitors can stroll in the park and admire a terrific number of ruins that once played an important part of Roman History: the Senate, the House of Vestal Virgins, the Basilica of Maxentius.

Following the tradition, you can lay a flower over the temple of Julius Caesar, in memory of the Roman statesman.

Here, as legend tells us, Rome was founded by Romulus in 753 BC. On the same hill, but centuries later, the luxurious house of Roman Emperors was built, the Flavian Palace. Remains of the building surrounded by pines and grasslands provide a suggestive view today. We can just imagine the original aspect of courtyards, decorated with marble statues. Don't miss the chance to visit the House of Augustus, with rare frescoes from the 30 BC.

Baths were erected by the Emperor Caracalla for Romans citizens to provide hygienic and beauty treatments: there were steam baths, swimming pools, gyms and gardens. Here it's possible to admire ruins of vaults, mosaics and rooms with an advanced heating system.You can compare this building with modern resorts, but of course ancient baths were public and an admission ticket was very cheap.

St.Clemente Basilica is an underground site of Rome, with 2 layers of ruins.A visit to this multi-layered church is like a time travel across centuries.Beneath the medieval basilica, the tourist can visit an early Christian Church with frescoes and a Roman district with warehouse, houses, and an altar dedicated to a mysterious Pagan god, Mithra.

Ancient Ostia was the marine harbour of Rome. When the seacoast changed, Ostia was abandoned and forgotten.Now it's an archaeological park, 45 minutes away from the center of Rome (by train). Like Pompeii, here everything is well preserved: temples, streets, shops, bars, houses and even public restrooms. Ancient Ostia is a perfect place to breathe the atmosphere of a small-town from the Roman Empire.

This post was written by me in the 2013 for the ToursByLocals Blog.

You can read the original version here